(Following a friend's example, in honor of my 30th birthday I have decided to post 30 things I have accomplished in my life in 30 years.  So for the remaining 14 days leading up to my birthday watch for a new  post each day celebrating these 30 things.)

One of the most sacred things I have experienced in my life is to perform a funeral.  It is a bit surprising to me how many people reach their 30's only having attended one, maybe two funerals in their lives.  (The same for weddings come to think of it.)  Over these last 30 years I've realized how much my family set the frame work for me to be working in ministry, even though I am the first in our family to choose ministry as my profession.

I don't actually remember this, but I think the first funeral I went to was of my great grandmother on my mother's side. 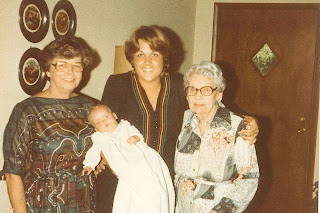 (Obviously not my great grandmother's funeral, as she is IN this photo - but I think her's was the first funeral I "attended" at just a few months old)

I DO remember my maternal grandmother's funeral (only vaguely), and the funeral's of my remaining three grandparents as they all passed away somewhere between 1993 and 200.  I remember distinctly the eulogy my dad gave at my grandfather's funeral; most of all, I remember that there was nothing "weird" or "morbid" about funerals.

Since I've become a pastor I've had the privilege, yes the privilege, of helping people through their grief and through those traumatic times.  I have been allowed into to very vulnerable moments, to places where people let down their guard because they have no more strength to hold it up.  I've had the duty of putting into words what so many want to say, to remember, and to memorialize about the one that they love, and I've had the daunting task of reminding loved ones that death does not have the final say.

I'm honored and humbled to say that I have performed a number of funerals in my 30 years and know that I will feel that same distinct privilege when others come along in the future.
Posted by Unknown at 2:35 PM