Sometimes I really wonder what I'm getting myself into going into seminary. Recently a bunch of parents from my church youth group kids threw a major hissy fit about one of the new youth group sponsors. It is fairly obvious that he has several scars on both of his wrists. Whatever people choose to see this as is their own choice, but after spending one night with the youth group - people are now saying that he should no longer be able to spend time with the youth. HELLO!!! Do you people not think that he ALREADY OBVIOUSLY suffers enough from his OWN persecution? Depression is like homosexuality people....it doesn't rub off - you can't catch it - it's not something you can just jump in and out of - people live with it - that's who they are - and how you choose to face them and "deal with them" affects them just as much as it affects you and your kids - probably MORE than you could ever imagine. Just because you can hide all of your deep dark secrets, and he physically can't, doesn't mean you don't have them. Everyone has them, and that's between you and GOD - last time I checked, GOD is the only one that gets to judge us. Thanks for applying for the job, but, "You're fired!"
Posted by Peace Babe at 10:45 PM 1 comment:

Email ThisBlogThis!Share to TwitterShare to FacebookShare to Pinterest
Labels: My Strong Opinion 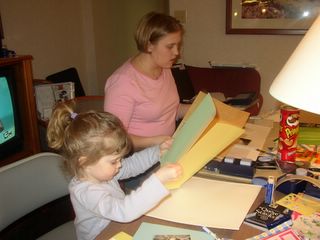 On March 4th-6th I participated with Creative Memories in the Sweet Suite Weekend Retreat. I get to invite my customers as well as participate myself and we just scrapbook ALL weekend! We stay in the Embassy Suites here in KC and set up shop in the living room area - then we all sleep elsewhere and get up the next morning and scrapbook some more! Kate came and helped us a little - mainly because her mommy missed her and Charlie. But it was funny to see Kate trying to scrapbook with us. I was insanely productive though - I got the first of my three New Zealand albums done!
Posted by Peace Babe at 11:48 AM No comments: