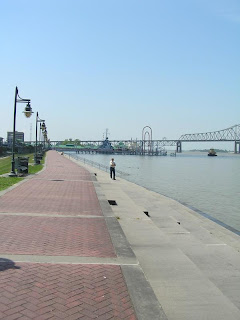 First I want to say thank you! Way to make a girl feel loved! Several people have called/emailed/texted me and asked me if I, or my church members, will be affected by the swelling Mississippi River. I am so thankful for friends and family that have shown concern as they have watched the news and remembered me and my "southern family"!

I am happy to report that I do not believe I will be affected, nor will the majority of my church members. I've mainly been getting my news from local sources, especially a local news channel, WBRZ, that has a web page dedicated solely to "The River Watch". I've heard from some that a couple of national news agencies have reported that Baton Rouge is flooding - which is not true. Yet. The Mississippi River AT Baton Rouge is very high - but the city is not flooding. At any rate, local news seems to be the best right now.


Having been through this type of situation several times throughout history, this part of the country is well versed in plans that account for severe rains north of here. You have to remember that the Mississippi drains all or parts of over 30 states and is fed by the Ohio, Minnesota, Missouri, Arkansas, Red Rivers as well as many others. So this isn't their first time at the rodeo. :)

You can read more about it on the links I've provided, but the basic plan is to put into use two different spillways that will relieve the Mississippi's banks and hopefully prevent any major flooding of the Baton Rouge (or New Orleans). The Bonnet Carre Spillway was opened on Monday which directs water into Lake Ponchartrain. 100% of the Bonnet Carre Spillway's capacity will be used. There is another one, the Morganza Spillway that is supposed to be opened sometime this week. That is a bigger deal because this spillway will flood homes and businesses to some degree. The consolation is that it will save the majority of houses, urban areas and highly populated areas (like Louisiana State Uuniversity's Campus). The plan as of now is to only open 50% of the Morganza Spillway. While it is devastating that many people will have damaged homes and camps (think lake house for all you non-LA residents), we are told this is the best option. This flood control system was put into place sometime after the 1927 flood, so people who have built homes or camps in this area should know that this was a possibility at some point and time. People that have homes in this area also generally build homes on stilts or even homes that can float. The authorities are providing sandbags to residents who may be affected, as well as urging other residents in harms way to do a "self-evacuation." People are preparing for this and are doing their best to get ready. I know many people who have already taken off work to go to their camps (2nd homes) to save what they can so its only the structure itself that is lost.

Bottom line, is that I should not be affected. My house sits on higher ground (if you can actually have that in Louisiana) and is not terribly close to the river. However, downtown Baton Rouge is on low ground and ON the river so downtown is certainly at risk. There are sandbags on the levee down there and the hope is that by using these spillways it will prevent any major flooding in the Baton Rouge urban area. Check out this map that will show you where the waters SHOULD go after the Morganza spillway is opened. Downtown Baton Rouge is underneath the bottom left box labeled "Disclaimer." My house and the church are somewhere under the rest of that white box.

Thanks again for your concern - I'll be sure to post more if there is anything new that comes up!
Posted by Unknown at 9:30 AM 1 comment: