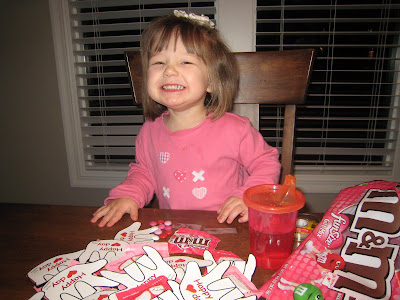 Is she not one of the cutest two nieces in all of creation? My niece made Valentine's and traced her own hand to create them. I love when this is what Valentine's Day is about!

Posted by Peace Babe at 8:31 PM No comments:

Email ThisBlogThis!Share to TwitterShare to FacebookShare to Pinterest
Labels: Blogs with Pictures, Family, Good Stuff from Outside Sources, Random Life 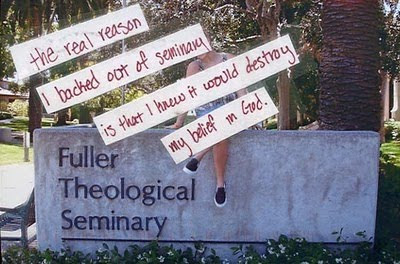 I found this "postcard" on postsecret.com - a website I like to look at from time to time.  I'm interested to see what my friends - especially seminary trained friends - think about this, or have to say about the comment.
Posted by Peace Babe at 1:42 PM 1 comment:

I went to my first Mardi Gras parade tonight!  There are TONS of Mardi Gras parades going on all around Southern Louisiana.  I didn't even have to leave Baton Rouge. :)  There's also a variety of types of parades, those directed more towards an "adult" crowd, and more family friendly parades.  Krewe Orion's is a family friendly parade - lots of fun floats, marching bands, dance crews and just plain fun.  Even though it's "family friendly" there were still plenty of beads to go around!

Posted by Peace Babe at 9:30 PM No comments:

I can't believe I'm lucky enough to enjoy ALL these "sports greats"! Today, Skip Bertman, LSU great, came and spoke to the men of the church. He came to the church to help with a fundraiser for our mission trip. It was a men's only event called, "The Ultimate Tailgate with Skip Bertman." They were treated to great tailgate food and a wonderful speech by Skip. Since I'm the Associate I kind of had an "in" and got to go myself. We also asked some of the Young Adult Women of the church to help with the Ultimate Tailgate, so there were even a few women that got to participate! 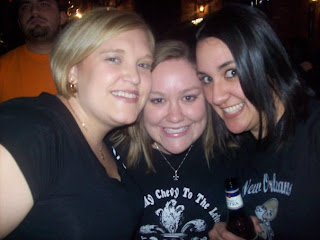 Me, Cheryl and Hollie watching the playoff game against the Vikings

While I'm proud of the Saints and loving this time down here, I'm not sure I can say I'm officially part of the Who Dat Nation just yet.

Yes, I live here in Southern Louisiana.  I watch the Saints games (when I'm not working at church).  I have the requisite Saints T-shirt.  From my ol' Mizzou days I have more black and gold than I know what to do with, and from my Kappa days I have more fleur-de-lis than one person should probably have.

Two weeks ago when the Saints and the Vikings played, to church I wore a pair of gold/bronze pants, with a black suit jacket.  I then covered the outfit with my black ministers robe and chose to wear the stole that has the most gold on it.  I then chose from the three crosses I wear around my neck, and chose the one that is gold in color vs. silver.

We cancelled Sunday Night Youth Groups and Sunday night services so we could watch the play-off game.  We already cancelled SNYG and worship for Super Bowl Sunday, but now we've added a few renditions of "When the Saints Go Marching In" to the service for this coming Sunday.

I've learned a thing or two about tailgating, mainly at LSU games, but I think it translates.  I'm learning how to "pinch da tail," but "sucking da head" will have to wait a few more tailgates/crawfish boils/beers.

I'm learning about the Who Dat Nation.

But I will say, I haven't been watching the Saints for 43 years.

Even if you aren't REALLY a Saints fan - it's hard not to be right now.  Southern LA is already on a high for Mardi Gras, so it's hard NOT to enjoy the celebration.  Whatever your passion - it's a fabulous time to live in Southern Louisiana...

I'd like to share with you a "letter" that's been passed around down here, from Saints fan to Saints fan.

It is written on behalf of the "Who Dat Nation" - of which I am learning to become a citizen - to the city of Miami.

The Saints are coming. And so are we, their loyal, long-suffering and slightly discombobulated Super Bowl-bound fans.

While there's still time to prepare -- although a few hard-core Who Dats will begin trickling in Monday, most of us won't arrive until Thursday or Friday -- we thought we'd give you a heads-up about what you should expect.

Yeah, we know. You ordered extra. You think you have more than any group of humans could possibly consume in one week. Trust us. You don't.

New Orleans was a drinking town long before the Saints drove us to drink. But it turns out beer tastes better when you're winning. (Who knew?) So let's just say we're thirsty for more than a championship; adjust your stockpiles accordingly.

And look. When we ask you for a go-cup, be nice to us. We don't even know what "open container law" means. Is that anything like "last call"?

It's Carnival season in New Orleans (that's Mardi Gras to you), and we'll be taking the celebration on the road. So don't be startled if you walk past us and we throw stuff at you; that's just our way of saying hello.

Oh, and sorry in advance about those beads we leave dangling from your palm trees. We just can't help ourselves.

February is also crawfish season, and you can be sure that more than one enterprising tailgater will figure out a way to transport a couple sacks of live mudbugs and a boiling pot to Miami.

When the dude in the 'Who Dat' T-shirt asks if you want to suck da head and pinch da tail, resist the urge to punch him. He's not propositioning you. He's inviting you to dinner.

And if you see a big Cajun guy who looks exactly like an old Saints quarterback walking around town in a dress ... don't ask. It's a long story.

We know that crowd control is a major concern for any Super Bowl host city. Our advice? Put away the riot gear.

Reason No. 1: Indianapolis is going to lose, and their fans are way too dull to start a riot.

Reason No. 2: New Orleans showed the world on Sunday that we know how to throw a victory party. We don't burn cars. We dance on them.

Reason No. 3: Even if we did lose, which we won't, leaving the stadium would be like leaving a funeral, and our typical response to that is to have a parade.

Speaking of which: If you happen to see a brass band roll by, followed by a line of folks waving their handkerchiefs, you're not supposed to just stand there and watch. As our own Irma Thomas would say, get your backfield in motion.

To us, "Halftime (Stand Up and Get Crunk)" isn't just a song; it's 576 points of good memories. It's the sound of a Drew Brees touchdown pass to Devery Henderson, a Pierre Thomas dive for first down on 4th-and-1, a Garrett Hartley field goal sailing through the uprights in overtime.

It's what a championship sounds like. You may get sick of hearing it. We won't. Encore, dammit.

Inside Sun Life Stadium, you may find your ears ringing more than usual. We're louder than other fans. Seven thousand of ours sound like 70,000 of theirs.

Don't believe us? Ask the 12th man in the Vikings huddle.

Some people think it's just the Dome that heightens our volume. But you're about to discover a little secret: We can scream loud enough to make your head explode, indoors or out.

It's not the roof. It's the heart.

Don't be surprised if there are more Saints fans outside the stadium than inside. A lot of us are coming just to say we were part of history, even if we can't witness it up close. The Saints are family to us, and you know how it is with family: We want to be there for them, whether they really need us or not. Because we know our presence will mean something to them, whether they can see us or not.

Come to think of it, seeing as how you're taking us in for the week, we pretty much regard you as family, too. So we're warning you now: If you're within hugging distance, you're fair game.

Hugging strangers is a proud Who Dat tradition, right up there with crying when we win.

Most sports fans cry when their teams lose. Not us. We've been losing gracefully and with good humor for 43 years. Tragedy and disappointment don't faze us. It's success that makes us go to pieces.

Hurricane Katrina? We got that under control. The Saints in the Super Bowl? SOMEBODY CALL A PARAMEDIC!!!

So anyway, don't let the tears of joy freak you out. We're just ... disoriented.

Order more beer. Throw me something, mister. Suck da heads. Wear da dress. Stand up. Get crunk. Hug it out. Protect your eardrums. Pass the Kleenex. Hoist the trophy.

See you at the victory party.

The Who Dat Nation
Posted by Peace Babe at 2:55 PM No comments: