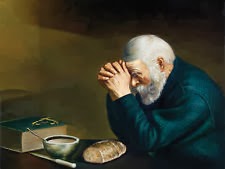 “When Jesus responded to the request of his followers that he teach them how to pray, what he taught them became important – and has remained important – for the life of the church.  He gave them – and us – words to address God, words to praise God, and, only then, words to petition God.” – James A. Wallace

READING: Luke 11:1-13
Jesus was praying in a certain place. When he finished, one of his disciples said, “Lord, teach us to pray, just as John taught his disciples.” Jesus told them, “When you pray, say: ‘Father, uphold the holiness of your name. Bring in your kingdom. Give us the bread we need for today. Forgive us our sins, for we also forgive everyone who has wronged us. And don’t lead us into temptation.’” He also said to them, “Imagine that one of you has a friend and you go to that friend in the middle of the night. Imagine saying, ‘Friend, loan me three loaves of bread because a friend of mine on a journey has arrived and I have nothing to set before him.’ Imagine further that he answers from within the house, ‘Don’t bother me. The door is already locked, and my children and I are in bed. I can’t get up to give you anything.’ I assure you, even if he wouldn’t get up and help because of his friendship, he will get up and give his friend whatever he needs because of his friend’s brashness. And I tell you: Ask and you will receive. Seek and you will find. Knock and the door will be opened to you. Everyone who asks, receives. Whoever seeks, finds. To everyone who knocks, the door is opened. “Which father among you would give a snake to your child if the child asked for a fish? If a child asked for an egg, what father would give the child a scorpion? If you who are evil know how to give good gifts to your children, how much more will the heavenly Father give the Holy Spirit to those who ask him?”


This Sunday we will reflect on the theme of our General Assembly of the Christian Church (Disciples of Christ), “Lord, Teach us to Pray,” that just concluded in Orlando, FL.  As we remember the prayer that Jesus taught us, we remember that Jesus taught US to pray with and for one another, not just as individuals.  We will focus on the ways that we prayed for and with one another at the General Assembly, specifically as we prayed for some of the resolutions passed, moving our denomination forward in peace and justice.  Join us this Sunday as not only remember to pray as we were taught after saying, “Lord, teach us to pray,” but also to hear the wonderful sounds of Kansas City Symphony Chorus Men who will join us for worship at 9:30 a.m.
Posted by Unknown at 10:41 PM No comments:

On Sunday, my nephew's baseball team got 2nd place in the baseball tournament in which they were competing. 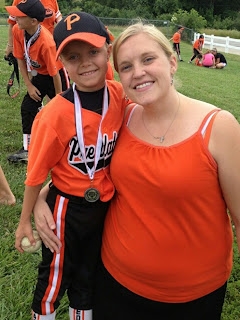 He was a really good sport, as was the rest of his team.  I know they were a bit disappointed, but overall they were really proud of a great season and a great game.  They improved a lot over the season, came together as a team and had a great time - Isn't that the best part, Predators?

I also preached on Sunday on 2 Kings 5:1-14.  In this part of scripture we find that Naaman, a commander to an army that is foreign to Israel is in need of healing because he has leprosy.  He and his army had just defeated Israel - but a slave girl, from Israel, has come forward instructing Naaman that there is a prophet in Israel who can in fact cure him!  He's just defeated Israel, but now this slave girl - the ancient world's consummate nonperson -  from Israel, is telling him that he can be cured, if he returns to Israel.  Trevor Eppehimer says, "this is yet another biblical instance of those to whom society attributes little intrinsic value serving as effective heralds of the power and presence of God."  This slave girl, who would be overjoyed to reach "2nd place" citizenship serves as a mouth piece to praise the power and presence of the Divine in the world, even though she is probably more like a 5th, or 6th "place" citizen - a nonperson if you will.

I couldn't help but think of all the ways we treat people as 2nd, 3rd, and lower-class people, especially in light of the recent decisions on DOMA, Prop 8, the Voting Rights Act and the Immigration Bill.  How many of these people that are being treated as nonpersons, yet like this slave girl are "effective heralds of the power and presence of God"?

I'm sure some are quick to say that some are not citizens of the US, so it doesn't matter if they are being treated as 2nd, 3rd, or even lower class citizens.  But that's exactly the point of this story in 2 Kings.  The God of Israel, the God whom we worship in Christian churches around the country used a prophet to Israel to heal an enemy.  And not just any enemy, the commander of an army that just defeated Israel.  It doesn't matter the country of citizenship - God sees past citizenship of country and welcomes each of us as citizens of the Kingdom of God.

I can understand the deep seeded questions that people have over some of these issues - because these issues are incredibly complex.  I thank you for your convictions to wrestle with the issues; even if I disagree with you I'm thankful that you are willing to study, read, listen to others, to discern, to agree with the opposite on some points, and to contemplate together.

Regardless where we stand though, we have to take a moment and think.  If a "nonperson" in the ancient world, a slave girl, effectively brought about this healing, what are we missing by continuing to treat others as "nonpersons"?  What power of God are we shutting out because we refuse to see "the other" as anything else than "other"?  What presence of the Divine are we missing when out of fear we limit the number of seats at the proverbial and literal table?

There are complex issues here that include not only our own faithful response, but also the question of how much should our own faith, and the faith of others influence these secular decisions.  And that's for another blog post.  However, as faithful people, our faithful response, should always, always, always be to welcome the other.  Not just welcoming by allowing their existence as "the other," but welcoming them and doing to them as you would have them do to you (Matthew 7:12).  Hospitality and welcome are of utmost importance, but the treatment of the underdog, the outcast, the nonperson and the ones that come in 2nd place (or further out) truly what we learn about when we consider the life of Christ.

I'm not saying that the people affected by DOMA, Prop 8, VRA or the Immigration Bill ARE 2nd class citizens, but it is easy to see that we as a society continue to treat them as such through various laws and legislation.  It is not right, but it continues to happen.  As a nonperson, an outcast, as a criminal himself, Jesus calls us to consider the ways we listen to the people that we have deemed a nonperson, the outcast and the 2nd placers.  After all, when we listen to those - we truly see the power and presence of the Divine.
Posted by Unknown at 6:10 PM No comments: