I stole this from a friend and then stole the response from the friend as well... but I just couldn't resist! This is especially for my friends Jeff and Kevin who put up with all of us girls ruining all of their "guy stuff"... sorry boys that we out number you here at LTS!! I'm trying to get the girls to just eat meat and drink beer.... But I think we're stuck with Boca burgers....

After the long months of cold and winter, we will soon be coming up to summer and BBQ season. Therefore it is important to refresh your memory on the etiquette of this sublime outdoor cooking as it's the only type of cooking a real man will do, probably because there is an element of danger involved. When a man volunteers to do the BBQ the following chain of events are put into motion:
1) The woman buys the food.
2) The woman makes the salad, prepares the vegetables, and makes dessert.
3) The woman prepares the meat for cooking, places it on a tray along with the necessary cooking utensils and sauces, and takes it to the man who is lounging beside the grill - beer in hand.
Here comes the important part:
4) THE MAN PLACES THE MEAT ON THE GRILL.
More routine....
5) The woman goes inside to organize the plates and cutlery.
6) The woman comes out to tell the man that the meat is burning. He thanks her and asks if she will bring another beer while he deals with the situation.
Important again:
7) THE MAN TAKES THE MEAT OFF THE GRILL AND HANDS IT TO THE WOMAN.
More routine.....
8) The woman prepares the plates, salad, bread, utensils, napkins, sauces and brings them to the table.
9) After eating, the woman clears the table and does the dishes.
And most important of all:
10) Everyone PRAISES the MAN and THANKS HIM for his cooking efforts.
11) The man asks the woman how she enjoyed "her night off." And, upon seeing her annoyed reaction, concludes that there's just no pleasing some women...

Then - this is a reaction from a friend.... I just couldn't stand to NOT put it up - it had me rolling!

See, but if you think about it, BBQ, like many other things, is something very basic that men have been a part of for centuries. Men eventually invited tomwen to BBQ years ago in an effort to score. Somwhere along the way, women thought the process of BBQing was "fun" & then domesticated the process w/all their girlie crap, thus getting things confusing & fancy. BBQ is a term for meat cooked outside over a fire. Very basic. BBQ is a term that goes hand & hand w/brisket, ribs, chicken, steak, etc. There are no "BBQ Salads", "BBQ Deserts", "BBQ Cake"- that's all woman food. When men are left to BBQ for themselves, men cook meat over fire, drink beer, socialize, & then have more meat for desert. Eaten with your hands, all of which is done outside in the heat w/bugs. If you drop your BBQ on the ground, you pick it up & continue to eat. Men are like animals, we are designed to eat meat; much like dogs- when we eat grass, we puke. We are not meant to eat green leafy things. That's for the animals that we cook & eat. When women are involved in the BBQ process, the meat is accompanied by green salad, macaroni salad, fruit, tea, and some fluffy salad made from marshmallows. All of which is served on matching plates, w/silverware, glasses, & napkins. Some light cake w/berries will probably show up for desert. We eat inside, in the AC or under a fan, w/a table cloth. If we do eat outside, it's while being surrounded by a thick haze of Citronella fog, probably under a screened in dining fly. So in response to this e-mail, it is an age old tradition that men are in charge of the essentials of the BBQ- meat, fire, & alcohol. If women want extra stuff like plates or salad, then that's something they will have to provide.
There are several other examples of man-stuff, that women feel the need to> domesticate:
Watching sporting events- guys watch & drink beer. More than likely we'll eat chips, pizza, snacks, & maybe BBQ. Everything will be perfectly fine as is. Women decide this will be "fun" & show up w/plates that look like footballs, cups w/baseballs on them, bowls for dip, & napkins.
Going to the lake- guys fish, ski, drink beer, & get sunburned. All of this is fine as is. Women decide "the lake is fun" & bring towels, floatie raft things, sun tan lotion, & something else to drink, like lemonade or pop.
Playing sports- physical competition between men, testing strength, speed, & skills. All is fine as is. Women decide they want to get involved cause it looks like "fun" & show up w/skirts & pompoms, dance & rhyme little cheers & don't even pay attention to a game they whine about not understanding (FYI- if you want to understand this- watch the game, stop talking & dancing). I could go on, but you all get the point.... Thanks Eric!
Posted by Peace Babe at 11:57 PM 1 comment:

Email ThisBlogThis!Share to TwitterShare to FacebookShare to Pinterest
Labels: Good Stuff from Outside Sources

Email ThisBlogThis!Share to TwitterShare to FacebookShare to Pinterest
Labels: My Strong Opinion

Yay - its spring and mid-terms are over - time to start going out more! On Friday night the seminary crowd went out to Rosebud's - mind you there were 8 ministers there, 4 ordained and 4 licensed and in the process of becoming ordained. We were all hanging out in our little booth - and the bartender had to kick this guy out because he was becoming very drunk and they didn't want to provide him with any more drinks. So on his way out he passes by our table and asks us in of course very slurred language, "Have ya'll found God tonight?"..... If you ONLY knew mister....if you only knew :) Ok, so maybe you have to be "one of us" to think that is hilarious, but we got a pretty good laugh out of it ;) Either way, I gave up alcohol for Lent this year, and although I definitely crave it when everyone is out like this - it's not all that bad...I don't spend any money (free drinks for the DD) and I don't feel like crap the next day! ;) 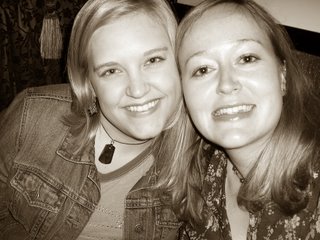 Kara is the master of self-portraits! 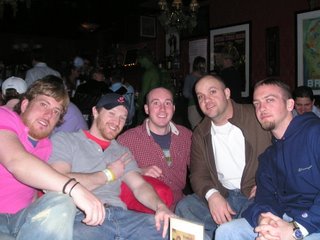 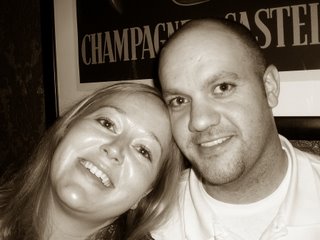 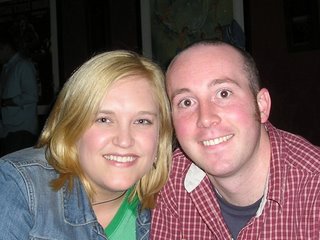 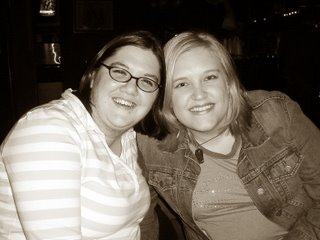 On any given Sunday - there are 4 or 5 and sometimes more, ordained or licensed clergy sitting in the pews of my congregation. Talk about intimidation! Today, a friend of mine and also a student at LTS joined the congregation and just pushed the intimidation factor up even more. This morning there were five ordained and one licensed ministers sitting in the congregation - not to mention Bill, our senior pastor. Sometimes I have trouble doing the simplest of things like writing prayers. What does this sentence in my prayer say about my theology, does it go against other parts of my theology, and most importantly are all these other ministers going to catch that then think about me and my inconsistencies for the rest of the day? I mean I know that for most ministers being judgmental is not part of their character - but it still sucks. On top of this all, my preaching professor at LTS is a member of my congregation - so not only do I have to preach in front of him before I even take his class, I have to preach multiply times in front of him, both in and out of class, and after I've (hopefully) already passed his class. I guess I just need to keep telling myself that if it doesn't kill you, in only makes you stronger and hopefully I'll be a pretty good preacher when all is said and done. :)
Posted by Peace Babe at 12:00 PM No comments: