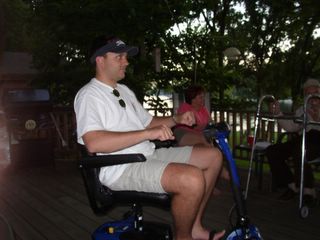 Chad isn't even a father and the only pictures we have of Father's Day is of my brother because he is a tool. We went over to my aunt Mable and Uncle Lyle's house as usual on Father's Day and my grandfather was there too. So Chad took it upon himself to use Grandpa's scooter in order to go get himself a new beer. Instead of walking 15 steps to the cooler, he thought it much more efficient to get on the scooter - use grandpa's "reaching stick" to get in the cooler and then back the scooter up to his chair again. I dread the day he actually does becom a father and teaches his children these things. I'm sure he's dreading payback as well for everything he put his father through! :)
Posted by Peace Babe at 11:50 AM