Craptastic...  it's been over two months since I last blogged.  In January I quietly told myself I would blog at least twice a month in 2012 - ha!

Recently a friend asked me if I had any memories written down from a mission trip several years ago, so I came back to check my blog from 2007 only to discover that I didn't write down anything then, and I haven't written down anything for a while... boo on me.

My senior minister resigned in November 2011 and his last Sunday was January 29.  (Funny story, while looking for those old blogs I discovered I also blogged about my senior minister leaving when I was serving Woodland in KY!)  In January our secretary also went from full to part-time - so we went from a three person full time staff, to one and a half people serving this congregation, so it has been a bit hectic.  I have wonderful elders and a licensed lay minister that is also helping with the worship duties, so that certainly takes some pressure off.  However, it is still a lot of pressure to lead this congregation well - and by the Spirit - so I have started contemplating investments in Tums, Community Coffee and a certain red-wine producer.

All that being said St. Patty's Day was a WONDERFUL break and we had lots of fun!  I will have to blog about that later.  Two yankees (with the help of ANOTHER yankee and one coon*ss) pulling off a crawfish boil deserves its own blog.

For now I want to share with you information about Shane and Draven.  Politics frustrate me because it seems as if we question certain things our government is doing or not doing, suddenly anyone who questions " 'merica" is suddenly not patriotic and doesn't support our troops.  I'm going to have to say that is a total lie.  That discussion is for another blog, because I want to share with you something about our veterans and the small way that Meghan, Sally and I supported them. 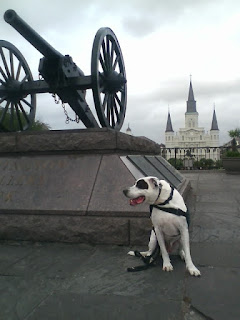 This note is about Shane and Draven.  Shane is a veteran making his way across the country with his service dog Draven to learn more about other service dog organizations and how they can be helpful to veterans returning from service, especially combat service.  Shane served int he US Marine Corps as an infantryman with the 3rd battalion 8th Marines Kilo Company and 8th Marine Regiment between July 2001 and July 2005.  He was deployed 4 times; twice to Iraq, once to Afghanistan and once to Haiti.  Shane shared with us his experience in the life he has received from having Draven at his side.  Draven was his own dog to begin with, but was trained as a service dog to be with Shane at all times and you can tell they are indeed an extension of each other.  In the same way that most dogs would give their own lives for their owners, Warrior Service Dogs, an organization dedicated to providing service dogs for veterans, strives to give back to those who would have given all for our country.  Check them out here.   Meghan, Sally and I even got a mention on their blog, Draven's Trail that you can check out here.

It was just a one night visit, but it was a great experience and a special thanks to Sally for allowing not only one, but two "men" into the house so that Shane AND Draven could have a good night's sleep. :)
Posted by Unknown at 6:35 PM