This weekend I had the chance to experience LSU tailgating and Death Valley! I’ve already received grief from Mizzou friends who say I’m jumping on a band wagon, not being loyal to Mizzou – but I will ALWAYS support MY Tigers. If – wait - when Mizzou and LSU play (Mizzou will make it one of these days!) I will ALWAYS support my Missouri Tigers over ANYONE else. But it’s not necessarily about loyalty, rather, respect, when it comes to witnessing one of these games and tailgating. Above and beyond though, I will always be loyal to MY Tigers! (I’ve also always received grief about supporting kansas when they’re not playing Mizzou, but as my dad reminds me, his kansas education helped get me to my Missouri education – so I have to respect a little.)

I’m just a huge college sports fan in general. While I love my Tigers and will always cheer them on, there’s a certain amount of respect that must be paid to “legends.” Like, the respect owed to the experience of sitting in Rupp Arena, or the respect owed to an experience at Allen Field house (NOTHING beats a Tiger win in Allen Fieldhouse though ;) ). One sports writer included a Saturday tailgating on the LSU campus as one of the most sublime fan experiences in American team sports. (In case you’re wondering, he included these other three: an afternoon game in the middle of summer at Wrigley Field, a crisp fall Saturday morning at Notre Dame, and a cold winter night inside Allen Fieldhouse.)

LSU Tigers don’t call it Death Valley for nothing. The Tiger Stadium seats 92,000+ fans and averages over 90,000 fans per game. During the 1988 LSU-Auburn game, the noise from the stadium was detected by a seismograph on campus, measuring ground movement for 20 MINUTES. And that was when they could only house 79,000 fans!

LSU has an actual Bengal tiger, Mike the Tiger – who has his own $2million+ habitat on campus where he resides when he’s not traveling with the team. His habitat would qualify for a version of MTV’s cribs. He, along with the cheerleaders, the band, the team and Les Miles also pass through all the tailgaters on their way to the stadium, witnessing the 120,000 people there to cheer them on (and oh yeah, party).

About 120,000 fans tailgate at each game, with over two-thirds of the fans tailgating for at least five or more hours before every game. Many even start the tailgate 24 hours in advance. LSU Tiger fans DO have an advantage that most of their games are at night (longer opportunity to tailgate) and it’s nicer weather farther into the season than say anywhere North of here. (See my pictures from the Missouri/Nebraska game).

I’m pretty sure the words “dry campus” do not exist in Southern Louisiana, I’m not sure how I even managed to type them without my computer exploding. While this gives LSU a tremendous advantage to the tailgating experience, LSU tailgating is not ALL about drinking – it’s ALL ABOUT THE FOOD! The ability to enjoy a drink “opening” certainly contributes to the experience in that tailgaters can enjoy a range of beverages, walking around the open fields, assigned parking lots, grass nestled between trees, roads and buildings right on campus where everyone gathers for the legendary tailgates. This is of course, only after you’ve filled your plate.

A friend told me I had to eat a brat while I was there, and that if I didn’t I was “doing it wrong”. I beg to differ friend. If you’re not eating boudin, jambalaya, pastalaya, crawfish etouffee, boiled shrimp, gumbo, kebabs, (plus burgers, brats and hot dogs) and those weird dirty rice fried things – THEN you’re doing it wrong. Their food is only trumped by their hospitality. I witnessed several occasions in my ONE experience this weekend in which people were giving opposing fans grief, shouting “Tiger Bait!” only to be followed by, “Come on over, have somethin’ to eat and drink! Come watch the game on our TV!”

I was giving my brother grief about his wanting a television at the Mizzou tailgate – but I ate my words this weekend. I can’t remember seeing this many Dish receivers in my ENTIRE life, not to mention the many chords, generators, projectors, 52” flat-screens and cables that pepper the tailgating grounds all around. A majority of people watch the game from their tailgates and never have any intention of going into the game. Some of them have spent hundreds of dollars on their season parking pass and probably can’t afford tickets! :)

Bottom line – I’m STILL GUTTED I can’t support my own Tigers, and tailgate in good ol’ CoMo on a regular basis. I would offer my first born if I could have a regular supply of Tiger Paw. :) But I’m also lucky to be able to experience ALL of these sports “greats”: MIZZOU in general (have I told anyone we began the tradition of homecoming?), Allen Fieldhouse, Rupp Arena and now LSU Football. What’s next on my sports legend agenda?!!? 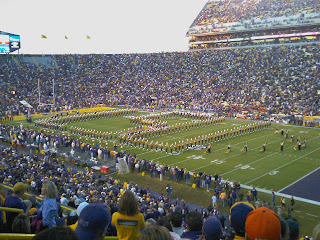 Inside the game - watching the Golden Band from Tiger Land! 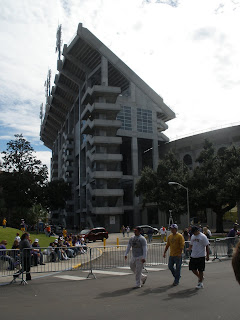 PLEASE tell me our seats aren't at the very top! Have I mentioned I'm afraid of heights? 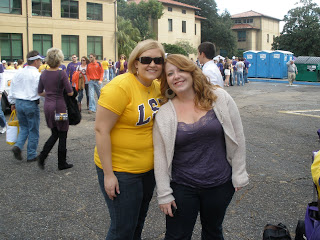 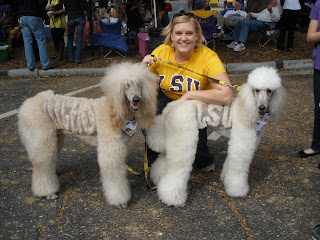 I can barely give Sally a bath without her squirming - NO WAY I could ever do something like this ;) 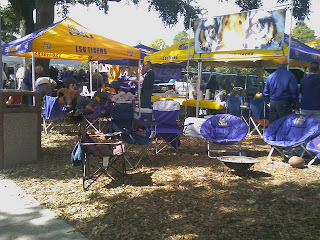 Just a SMALL glimpse at the insanity that is LSU tailgating!
Posted by Peace Babe at 11:52 AM