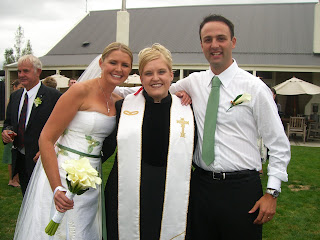 Just for our own personal enjoyment/interest - but also as a way to explain to all my friends how I have a New Zealand family, we sat down tonight and "mapped out" all the visits our families' have had since 1981.

First of all, there are two families - beginning with mine. Randy & Pat, Chad, Kerri and Laura.

In 1980/1981 my parents (Randy and Pat) and my NZ parents (Doug and Jenni) met through welcome wagon when they all lived in Syracuse, NY - and we've just been friends ever since. Rupert and I weren't part of the family quite yet in 1980/1981 - but that's the beginning of this connection...

1991 - Jenni came back to the states to celebrate her 25th HS reunion (she was a foreign exchange student back then). Jenni came to KC for a visit on her way through the states
1992 -
1993 -
1994 - Doug came over for a business trip and dropped off some of Jamie's things ;) Jamie also arrived in the US for one year of High School.
1995 - Jamie finishes his "Senior Year" of High School and Jenni came over for Jamie's graduation.
1996 -
1997 - Kerri came to NZ for a visit over her Christmas break.
1998 - Jamie came to USA for a visit as part of his 21st birthday celebration.
1999 -
2000 - Pat and Randy visit NZ and meet Jamie's girlfriend at the time, Hannah.
2001 -
2002 - Laura studied abroad at Victoria University. Chad also came for a visit to NZ while I lived in NZ. Also in 2002, Rupert came to Kansas City before departing for Fresno State on a soccer scholarship, and also spent Christmas/New Year's with us.
2003 - Jamie and Hannah came to Kansas City on their way to their "Overseas Experience" in London.
2004 - Doug and Jenni came to Kansas City on their way to see Jamie and Hannah in London.
2005 - In August, Randy, Pat, Chad, Christie, Kerri and Laura went to California for Rupert's wedding and was able to see the entire New Zealand family. In October, Jamie came to the States for THREE DAYS to be at Chad's wedding in Dodge, Nebraska!
2006 - Laura went to London to see Jamie and Hannah on her way back from Poland from a school trip. Chad and Christie also decided to visit Jamie and Hannah in London and make a quick trip over to France.
2007 - Jamie and Hannah came to Kansas City on their way home from London, before returning to New Zealand.
2008 - Randy flew to California on a business trip and was able to see Rupert right before Rupert flew home to New Zealand.
2009 - Jamie and Hannah get married! Randy, Pat, Chad, Kerri, Garrett and Laura come to New Zealand to celebrate with the family!
2010? - Maybe Chad and Christie will be over for a visit? :)

We hope there will be many more experiences in the future - and that the next generation will keep this going! ;)
Posted by Peace Babe at 5:14 AM