I'm safe and having a great time! It is currently 10pm on Saturday evening in Izmir, Turkey. We have traveled for four days and seen some of the most amazing sites ever! I've had limited email access and phone access, so I apologize to anyone who has been worried about me and our group after hearing about the bombing in Athens. We will be in Athens in about another week and our guide and our professor leading the trip both seem confident that we will be safe. They are both really knowledgeable about us Americans traveling around here in Turkey, so I'm not worried. Plus, its not like we had an invitation from the US Ambassador to have coffee or anything, so we won't be by the Embassy at all.

We traveled for the first day, spending about an entire 24 hour day traveling to get here and then basically collapsed when we arrived at our hotels. Life here in Turkey is amazingly Westernized and quite nice. The cities seem fairly "normal" and similar to what city life would be like in the United States. However, we haven't had much time to sit and wander around the cities because we are always on the go. We are always looking at ancient ruins or driving on our bus to see ancient ruins, or stopping to use the Water Closet (bathroom) and paying 50 cents to USE the bathroom! :) So far, we've visited Izmir, Thyatira, Philadelphia, Sardis, Laodicea, Pamukkale, Hieropolis and Ephesus. We still have to visit Pergamum, Assos, Alexandria Troas, Troy, and Canakkale before we head to Greece for the second half of our trip.

These are BY NO MEANS great depictions of the beautiful sites we're seeing, but I tried to update just a few pictures on to the webpage so you can see what I am taking pictures of! I've taken close to 400 pictures already - I think I may need to buy another picture card before the trip is over! 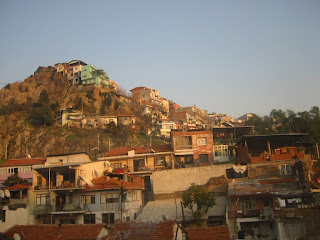 This was our first view of Turkey and Izmir. These are some of the lower class run down houses as we entered into the city of Izmir from the airport. Izmir and most of Turkey is very hilly and reminds me of Wellington New Zealand or San Francisco, because all the houses and buildings are built right into the side of the hills. 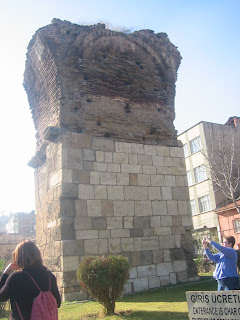 This is one of the pillars remaining from St. John's Cathedral in the Biblical city of Philadelphia. Our trip is mainly centered around the Seven Churches mentioned in Biblical book, Revelation. In that book, John sees a figure, who most assume to be Jesus, who addresses seven different "churches" or religious communtities in seven specific cities, and basically tells them everything they are doing right and wrong and how to prepare for the "end times" Philadelphia, the city of brotherly love, is one of those cities, or churches! 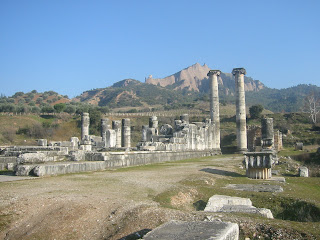 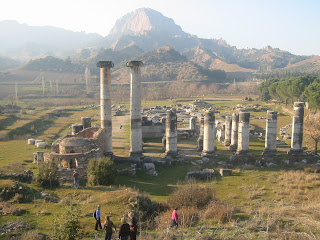 These are what remain from the Church at Sardis. Because these Christian communities existed after the Greek and Roman cities were already there, many of their churches were built on top of Ancient Pagan Temples of that region. This is one such example, so these stone re-erected were originally a Pagan Temple that was changed into a church. 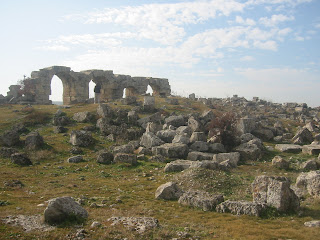 I'll have plenty more to add later - I'll try to keep everyone updated as I can. Thanks for all your prayers and concerns - looking forward to catching up soon!

Email ThisBlogThis!Share to TwitterShare to FacebookShare to Pinterest
Labels: Greece and Turkey