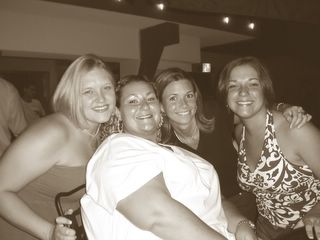 The girls and I went to Granfalloon last night - the new one that just opened up near Zona Rosa. Laura is single and fancy free now - so let's take advantage of that! We had a great time, and it was good to hang out with the girls from high school for a while. Michael ended up coming, just as my brother and Christie did, and as well, Jason Breit. I ran into lots of people from Mizzou, including one friend of mine who actually lives in St. Louis - so that was random. Good to hang out with everyone before I head off to KY!!
Posted by Peace Babe at 11:57 AM